At Fusion3, we strive to keep our printers running top-notch to meet all your business printing needs. Our goal is to enhance your user experience with our EDGE 3D printers without needing to continually purchase costly hardware to access updated features. One of the ways we do this is with frequent firmware updates.

Our most recent firmware update for the Fusion3 EDGE 3D printer includes updates, bug fixes, and improvements to usability.

All EDGE users should check their systems and install this update if they haven’t done so already.

What Are EDGE Firmware Updates?

Firmware updates for EDGE can contain one or more of the following components:

All of these are provided in one easy-to-install .zip file. So no matter what is in a particular update, you install them on your printer the same way every time.

This particular update contains updates to system files, a new control board firmware, and a small update to the user interface. More details about what exactly we’ve changed are below.

How to Check Your EDGE’s Firmware

Here’s how to determine if you need to install this update. 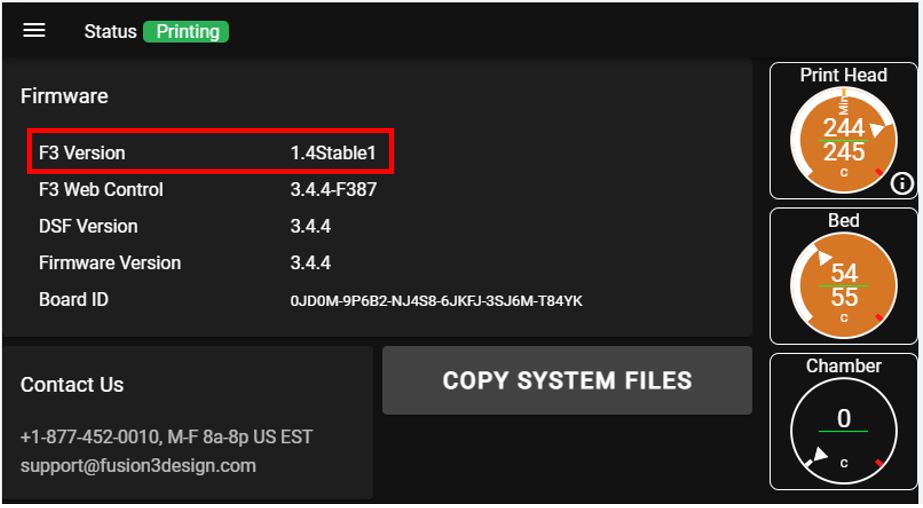 IMPORTANT NOTE: When you install 1.4stable2, it will show “1.4Stable1” on the Info screen. This is normal!

These designations are part of how we number our firmware releases.

A “t” build is a test build. It’s a build we’ve made for internal or limited testing with customers, but isn’t a stable or formally released build. The number after the “t” iterates each time we change something.

A “stable” build is a formal release. The number after it iterates if we change something. For example, there was a mistake in the 1.4Stable1 build so we made 1.4Stable2.

GETTING HELP WITH THE UPDATE

If you encounter issues with applying this update to your EDGE printer, or have questions, please reach out to our support team: